Victor Gugushev won the Young Lawyer of the Year Award

The award was received on November 24th (Saturday) as part of the National Themis Awards - The Price of Truth. The ceremony took place as a charity ball for lawyers. Mr. Victor Gugushev won the prestigious Young Lawyer of the Year Award, presented by the lawyer Mrs. Velichka Almisheva, who won the Award in 2017. In his speech, Mr. Victor Gugushev shifted the focus from himself and expressed gratitude to all of his fellow lawyers - present and absent. In his words, "A person becomes a good lawyer and a good professional when there is healthy competition, and there are good people to learn from, good people to argue with. Both in the Sofia Bar Association and generally in Bulgaria, we have wonderful lawyers and that's what makes us all better!"

On behalf of Gugushev & Partners Law Office - Congratulations! We are proud of you! 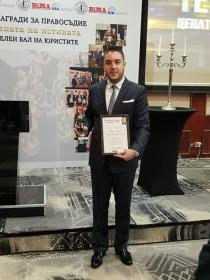 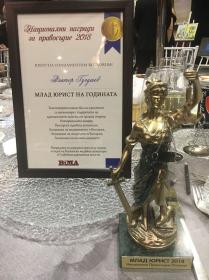